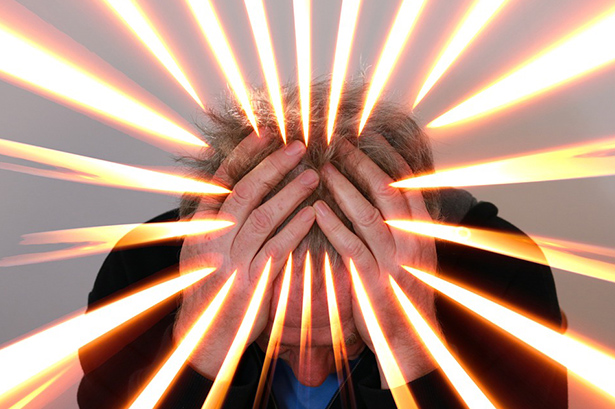 Migraines are much more than a splitting headache, they are debilitating and can ruin people’s lives.  Although doctors are getting much better at treating migraines there is still a great deal of uncertainty as to what causes them. People can start suffering from migraines at any age and suffer varying intensities of the four stages; prodrome, aura, attack and postdrome. There are a number of circumstances that trigger a migraine these include; hormonal changes in women, stress, alcohol, food additives, physical exertion and disturbed sleep patterns. A typical migraine sufferer will be a woman in her thirties with PMT and a family history of migraines. Here are the five main symptoms you should look out for.

This first stage can occur one or two days before the onset of a migraine.  Warning signs of a migraine include; constipation, mood changes, food cravings, neck stiffness, yawning more and increased thirst and urination.  You may have already noticed that a migraine happens after you have had some of these symptoms.

An aura is the manifestation of symptoms relating to the nervous system.  When suffering an aura people tend to have distorted vision and see flashes of light, wavy and zigzag vision. Others can suffer verbal and sensory disturbances where speech gets slurred and uncomfortable sensations can be felt on the skin.  Limb weakness has also been noted as a symptom.  Auras can last up to an hour at a time.  Not all migraine sufferers experience an aura.

An untreated migraine can last from four to seventy two hours and the frequency varies from person to person.  Symptoms of a migraine attack include; headache on one or both sides of your head, a throbbing pulsing pain, sensitivity to light, smells and touch, nausea and vomiting, blurred vision and light-headedness.  Some people even faint during a migraine attack.

A migraine attack can leave you feeling either drained or elated immediately after it has finished.  Other symptoms you may encounter include; confusion, moodiness, dizziness, weakness, light and sound sensitivity.

Symptoms That Require A Doctor’s Appointment

If you are used to suffering migraines you may take it for granted that every headache is a migraine.  In most cases your headache is probably not unusual but if you have any of the following symptoms you must contact your doctor immediately:-

According to the NHS website there is no set treatment for migraines and sufferers have to try many different combinations of painkillers, anti sickness drugs and alternative therapies until they find a combination that relieves symptoms.  Sometimes over the counter painkillers are ineffective so medication containing Triptan is used. Triptan is believed to be able to reverse the brain changes encountered during a migraine.  Avoiding triggers and taking a healthy approach to life also helps to relieve symptoms.

To review and purchase treatment for migraines please click here.