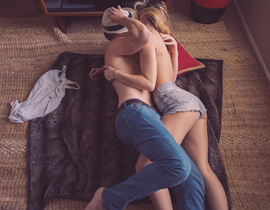 Is Your Love Life Causing Your Cystitis?

Cystitis used to be known as the, ‘Honeymoon Disease’, because virgin brides who lost their virginity on their wedding night sometimes suffered from Cystitis. Now that many couples cohabit before marriage, suffering from cystitis after the honeymoon is less common. Cystitis can strike at any time and any age. Ladies in their fifties who are having a resurgence in their love life are increasingly suffering from the condition. Men rarely catch Cystitis because their anatomy is.... better designed than women’s. Cystitis is very uncomfortable and causes an urgency to go to the toilet.

Inflammation Of The Bladder

Cystitis is an infection that causes the bladder to become inflamed and the sufferer has an urgent need to pass water. Cystitis is very painful, very little urine is actually passed and there may be blood present. Sexual intercourse can cause cystitis without an infection being present, as the bladder can become irritated due to being bashed and bounced around. Infection can also be present due to the man’s genitals being close to both the back passage and vagina. If you suffer from the symptoms of cystitis for longer than 48 hours you must seek medical help as it can cause kidney damage if left untreated. Men who suffer the symptoms of cystitis must consult a doctor immediately.

23 Positions In A One Night Stand

Prince was certainly not thinking about cystitis when he topped the charts with his song, ‘Gett Off’, however some sexual positions such as; spoons, doggy style and woman on top can encourage incidents of cystitis due to the amount of contact the ulva and anus have with the men’s genitals. More seasoned lovers are at most risk of contracting cystitis due to the increased time it takes for the man to ejaculate, vaginas become drier after the menopause and older genitals become thinner. Lubricants can make sex much more pleasurable if dryness is an issue. After sex both partners must make sure that they clean themselves thoroughly, to prevent infection, whether they shower separately or together it is entirely up to them!!

If you suffer the following symptoms it is highly likely that you have got cystitis:- Feeling generally unwell with signs of fever. Stomach ache. Dark urine that may have blood in it. An urgent need to go to the toilet. A stinging sensation when passing urine. Passing a very small quantity of water when you go to the toilet. You must consult a doctor if these symptoms persist for longer than 48 hours.

People who are prone to cystitis on a regular basis can treat it by trying to neuralise the acidity of the urine by drinking liquids containing a high alkaline content. Often these treatments are successful and prevent the symptoms from getting more serious. If symptoms persist and get worse then your doctor will prescribe antibiotics to treat the infection. It is vitally important that you complete the course and drink plenty of water. Overuse of antibiotics makes them ineffective so it is important that you take preventative measures to prevent further infection.

Preventing cystitis is relatively simple and can become part of everyday life:- Empty your bladder every time you go to the toilet. Drink plenty of water. Urinate after sex. Keep yourself clean to prevent the spread of infection. Apparently drinking cranberry juice is a good preventative measure because it is believed to line the stomach. (It is not considered effective when you are suffering from cystitis). If you have had cystitis symptoms for longer than 48 hours visit our cystitis consultation page so that you can receive proper treatment. Don’t let a simple infection stop you from having a healthy love life.